This week’s Old Masters sales offer the potential to set a number of new records for old names. The auctions begin on Tuesday, July 5th at 7 am EDT. Christie’s Old Master and British Works on Paper: Drawings, Watercolours and Prints 1500-1900 will take place live in London. The sale comprises about 250 lots including works by Tiepolo, Boucher, and Dürer. Also in London at the same time, Sotheby’s Master Sculpture from Four Millennia sale will showcase works from 2600 BC to the turn of the 20th century.

On Wednesday, Sotheby’s will continue on the same theme with the Master Works on Paper from Five Centuries sale at 5:30 am EDT. The auction includes a delicate sketch of two female figures by Gustav Klimt with an estimate of $34,303. At a slightly higher price-point, the sale has a Turner watercolor with an estimate of $98,008. The framing of the simple work calls to mind some of his most famous compositions.

On the same day, Bonhams’ Old Master Paintings sale will take place at 9 am EDT. At the top of the price spectrum, there is a sixteenth century portrait by Bartolomeo Passarotti that has an estimate of $245,654. Passarotti’s most sought-after works at auction are all portraits, and if this one achieves its estimate, it will become his third highest public price. Bonhams is also offering a 1640 trompe l'oeil still life by Edward Collier. Collier’s top price achieved at auction is $66,131, achieved in 2016. Bonhams’ work has an estimate of $122,827, nearly double the previous record.

At 2 pm EDT, Sotheby’s will hold a curated 22 lot Old Masters Evening Auction with the potential to set some record prices. The priciest lot in the sale is a 1718 sea-scene by Willem van de Velde The Younger. Many of Van de Velde’s paintings reside in important institutional collections, but his record price at auction is in the mid five-figures; Sotheby’s is offering this picture with an estimate of $4,913,075, potentially adding two zeros to his market prices. The sale features a number of artists who are museum staples, including Jean-Honoré Fragonard and Pieter Brueghel the Younger. A misty Fragonard dreamscape from 1732–a study for The Fountain of Love–is being offered with an estimate of $245,654. A characteristically raucous crowd scene by Brueghel the Younger has a $1,228,269 estimate.

On the heels of Sotheby’s sale, Christie’s Old Masters Evening Sale will take place on Thursday, July 7th at 2 pm EDT. Christie’s is offering a painting by Lucas Cranach the Elder with an estimate of GBP 6,000,000. The lot has the potential to become one of the artist’s top three prices achieved at auction. The sale also includes a sculpture by Antonio Canova that is similarly poised to present a market reset. The early 19th century marble has an estimate of GBP 5,000,000. Currently, Canova’s record price is held by a bust that sold for $5,135,618 in 2017. Artemisia Gentileschi’s market continues to strengthen with the outpouring of institutional support she has seen in the past decade. Sotheby’s is offering one of Gentileschi’s signature scenes of biblical heroines with an estimate of GBP 600,000. A version of the same scene sold at Sotheby’s in New York in 2020 for $740,000.

The week’s sales begin the morning of Tuesday, June 7 at Bonhams’ New York outpost. The Male... 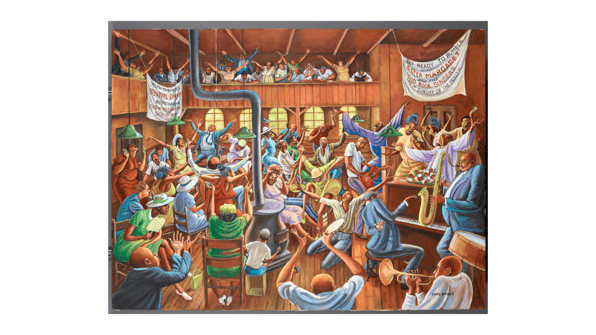 If you thought the Ernie Barnes wave had run its course, last week gave you a big surprise....