Phillips New Now made $8.4 million with a 169 lost sold out of 195 offered for a sturdy 89% sell-through rate continuing the strength of the market for emerging artists. The top lot was a still life of flowers in a vase by normally abstract painter Eddie Martinez. I Feel Alright from 2007 carried a $150,000 low estimate but sold for $352,800 with fees. Panels from KAWS’s 2012 work The Nature of Need made $226,800 which was strong enough to put the work second in the sale’s top ten but still meant the work had to be sold at a price below the low estimate.

Jordy Kerwick made a record price when his untitled work was sold as the third lot in the sale. The low estimate was a laughable $15,000 compared to the final premium price of $201,600. That means the work was sold for more than 10 times the low estimate. One only imagines the Phillips team and the consignor wondering how low they could make the estimate to maximize the publicity pop of such a high multiple.

Rafa Macarrón’s Naturaleza Muerta 1 seemed to follow a similar path selling for $189,000 against a $60,000 low estimate. The sale price was strong indeed but still lags the private market for the artist’s work.

The appetite for Stanley Whitney paintings continues to be ravenous as a small work of only one foot square was bid from the $30,000 low estimate to $176,400 as a premium price. Genieve Figgis saw Romeo and Juliet on a Horse from 2016 sell for $163,800 which was a solid price. The same price was paid for Portia Zvavahera’s Ndapfugama Wani from 2014 but the competition was brisker since the painting had a $50,000 low estimate. Ed Clark’s untitled 2002 work also came in at that price point having started a couple of ticks higher with a $70,000 low estimate. So did Juan Muñoz, The Crossroads Cabinets: March from 1996. It carried guidance at $80,000. 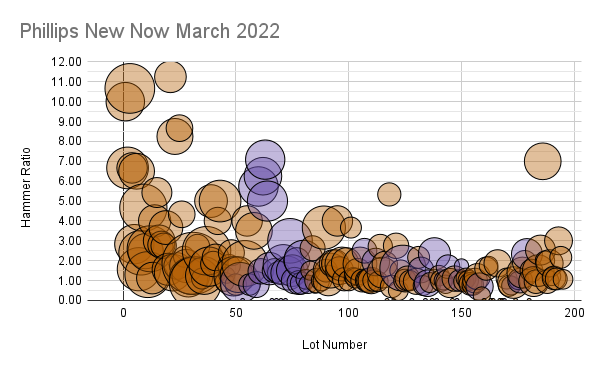 The graph above shows all of the sale’s lots plotted by hammer ratio (or the hammer price divided by the low estimate which is an indicator of market depth and demand) with the size of the bubbles indicating the final selling price. Larger bubbles equal larger prices paid. We colored the lots made in the 21st century in brown and the 20th century lots in purple.

A familiar pattern emerges of strong bidding at the beginning of the sale. You can also see from this chart that 80 lots, or almost half of the lots that sold, achieved hammer prices above the estimate range. An additional 58 lots were sold within the estimates. Only 30 lots were sacrificed by their consignors for prices below the low estimate.

Along with the Kerwick, other artists who saw sales that popped far above the estimates into the six figures were GaHee Park, Isshaq Ismail, Sanford Biggers and Robert Nava.