The painting enters a Monet market supercharged by the pandemic

Claude Monet made one trip to Venice in 1908 rather late in his life. He was 68 when he arrived. While he was there he started 37 pictures which he would take several years to eventually finish, exhibit and sell. Sotheby’s is mimicking Monet’s desultory route to market for his Venetian views with today’s announcement in Taipei of the sale of Le Grand Canal et Santa Maria della Salute. The painting will then make a brief appearance in Venice for the Biennale in late April before being auction in New York in May. The has an estimate in the region of $50 million.

Only half a dozen Venetian pictures have come to market in the last decade but none since Monet’s prices have made a dramatic jump. As LiveArt illustrated here, values for Monet works have moved up significantly since the pandemic and 2020’s occlusion of the market. A pair of very similar nymphéas paintings were sold on either side of the pandemic divide. One sold for $21 million beforehand; the other sold for $50 million after.

Two of the Venetian paintings that sold before the price jump achieved substantial prices. Le Palais Ducal, nearly identical to a work in the Brooklyn Museum, made $36 million in February of 2019. A version of Le Grand Canal like the one Sotheby's is offering in May was purchased at Sotheby’s in 2015 for $35.8 million. Le Palais Contarini made $30.5 million in 2013. Another, more distant view of the Doge’s palace was sold in 2015 for $23 million. Two less spectacular Venetian views were sold in 2017 and 2019 respectively for prices of $8 million and $6.8 million.

All of this market action took place before the Monet price jump. Does that mean the $35.8 million paid in 2015 suggests a price for a lookalike work of $70 million or even more in 2022? Maybe.  The images in those two very similar nymphéas works were different in quality—but not different enough to justify one selling for 2.5 times the other. Then, again, Sotheby's has clutch of lesser Monet works on offer in London earlier this month that struggled against their estimates. Those works were hardly on par with this one, though.

With the Grand Canal paintings we have more than a pair of works to think about. While in Venice, Monet painted this same view six times. Each view has the mooring poles in the exact same place but the color palette and hazy light that Monet is so famous for vary from work to work. The Fine Arts Museum in San Francisco owns one; the Beyeler Foundation in Basel owns another; Boston’s MFA has a third.

The remaining three, including the work on offer, are in private hands. One appears to be owned by the Nahmad family. This work comes from a private collector who had acquired it in 1994 from Japan (though it appears to have had a brief stint on the auction block where it failed to sell at $5.7m.) The painting has not been exhibited for 24 years. 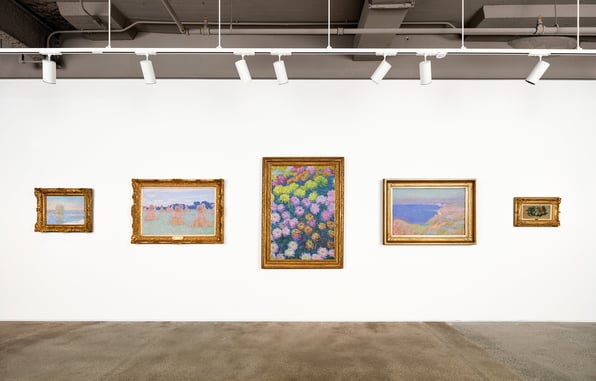 Everyone knew 2021 was an extraordinary year simply judging from the first half results six...