$3bn and counting: By the time Christie’s two evening sales had finished Thursday night, the two-week total had crossed $3 billion with $66 million to spare and two day sales still to come. As the total dollar volume rises, the time frame for the sales has compressed. Once a two-week cycle, the auctions now take place as a near-continuous trading event with one house’s day sale bleeding into another’s Evening sale.

It’s a mad scramble for sales: Auctions have become an endpoint, not an event. Sales are often a hybrid private-public process. At the top end of the price spectrum, works are often procured with a buyer in place but what bankers call a “go-shop provision” in place where the price is tested against other potential offers. The rest benefit from an all out effort to secure a bidder. In the second half of the 20th Century sale, a copper Donald Judd bullnose from Roger Sant’s collection had bids to $2.6 million which was just above the low estimate. Auctioneer Adrien Meyer was eager to close the lot and move on but the specialist was determined to get an extra bid from her client. She held her ground with Meyer while pleading with the client who eventually gave in. The pleading paid off. Her bid won the lot. All across town this week, similar scenes have played out.

The week could have ended much differently. As it was, Christie’s only suffered one major casualty, the 1978 de Kooning priced at $35 million and guaranteed by the auction house. The consignor had acquired the work directly from the estate. It was competing against additional estate works priced just below it. The thin bidding for the estate works the night before likely hampered this work. There just weren’t enough buyers for de Koonings at $30 million this week. That said, this slug of sales will pique interest. Christie’s will likely be able to sell their work privately or bring it back to auction in a few years with a lower estimate. It is not uncommon for such works to eventually out perform the initial expectations.

Absorption distortion: Christie’s team was sprinting toward the finish line during these two sales. The huge lift of the $1.6 billion Paul G. Allen collection required a quick turnaround to line up bidders for these sales. Five lots were withdrawn from the sales and seven lots were bought in. In a different era, those numbers would be remarkable for the 92% sell-through rate. Today, that number is a vestige of a few lots that slipped through the cracks. The Allen collection had five lots over $100 million, 12 lots above the highest-priced lot in both of Christie’s Evening sales and 19 eight figure lots to a dozen in the Evening sales. Nearly a billion dollars was spent at Christie’s during the Allen sale at prices above the top price of these various owner sales. By the time the Day sales are done and counted, the tally should be an additional $500 million from the various owner sales. That’s a huge amount of art for the market to absorb at a time when economic expectations are anything but positive.

Even in these conditions, there were works to compete over: The 20th Century sale saw five of the top 15 lots attract serious bidding above the estimate. The top lot was Modigliani’s portrait of Beatrice Hastings from 1915 that made $17.5 million. Roger Sant’s beautiful late Joan Mitchell work from 1989, a period that shines in the current retrospective in Paris, was sold for a solid $14.1 million. Two smaller, earlier works performed better against the estimates but the final price for Sant’s abstract painting is now Mitchell’s third highest price at auction. Robert Ryman’s untitled Winsor work from 1969 was won by his former dealer for $12.6 million. Paul Signac’s view of La Rochelle made $6.3 million, a 50% price rise since it last sold 11 years ago. Former Barnes & Noble mogul Len Riggio bought Alighiero Boetti’s Tutto for $6 million. Boetti’s three highest prices at auction have all come in the last 30 days. Roger Sant’s three sculptures, an Isamu Noguchi that sold for $1.8 million over a $500,000 estimate; an Arp that sold for $2.3 million over a $700,000 estimate; and a Hepworth that made $2.7 million over a $1.2 million estimate, were all among the top lots by bidding.

Defending Barnes: Competition was most intense for the last lot in the 20th Century sale, Ernie Barnes’s One-On-None from 1979. It was helped along by the estate’s gallerist Andrew Kreps who was bidding by phone from the back of the room. Kreps and Christie’s Los Angeles specialist Alex Marshall exchanged too-obvious nods of self-congratulation when they had finished pushing the lot well into the six figures where other bidders took over. The work sold for $945,000, Barnes’s fifth highest price. The entire exercise seemed to be necessitated by the abnormally low estimate—five-figures in an evening sale—placed on the work.

Second helpings of Howardena Pindell: For the second year in a row, Christie’s has sold a work by Howardena Pindell for $1 million. The untitled 1971 work underscores Pindell’s absence from the art market. Even though Pindell and several of her peers are now seeing auction sales, their long overlooked work tends to trade privately which mutes the public sales record.

Morris Louis Moment: In the past two days, works by Morris Louis have achieved the artist’s second and third highest prices at auction. Sotheby’s sold the most expensive stripe work for $4.4 million. Christie’s sold a Floral for $5.58 million.


Have we seen the market shift? Maybe not. Going into the week, the assumption was that young artists selling for seven figures would be the most vulnerable market sector. It didn’t play out that way. Jaune Quick-to-See Smith, Salman Toor, Rashid Johnson, Anna Weyant and Shara Hughes all saw aggressive bidding in the 21st Century sale.

The one that started it all: Five years ago, the market for figurative artists from the African diaspora was detonated when Njideka Akunyili Crosby’s The Beautiful Ones from 2012 set a record price of $3 million. It sold again Thursday night for $4.7 million, a 57% rise over the holding period.

Charity begins at home: In what might have been a bid to counteract Sotheby’s initiative to have galleries and artists partner to sell work to fund charitable donations, Christie’s had two works at the beginning of the 21st Century sale that were being used to fund eleemosynary efforts. Salman Toor sold a work to help Pakistan cope with the intense flooding that has plagued the country. Rashid Johnson moved his top price up by $500,000 to $3 million by offering a work that will benefit Right of Return USA, a program that helps formerly incarcerated creatives with fellowships.

Soft targets: Works by Charles Ray, despite the major retrospective at the Met this year, Martin Kippenberger, Gerhard Richter, Christopher Wool and Toyin Ojih Odutola, were all sold at prices below the estimates. Jean-Michel Basquiat and Mark Grotjahn each had two works sell at compromise prices. These are all established artists whose work could be considered a safe haven in art market storm. But that’s where we’re seeing the softening, not necessarily among the emerging artists.

Quarles conundrum: Some observers interpreted the sale of Christina Quarles’s Fallback, Back/Side from 2017 as a sign that her market has been reset. But the numbers tell a different story. The $604,000 price puts the work among half a dozen other works sold in the last two years of a similar size. Her market is consistent for these works. The two works that have sold for above $1 million are significantly larger. There’s one work that sold last month for a price in between the $600k band and the million-dollar works that is arguably a significantly better composition. This one sale is within the normal distribution of prices. 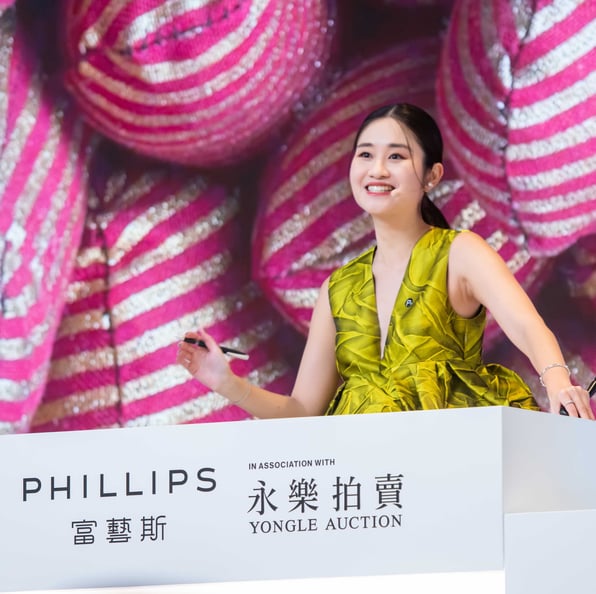