Emily Mae Smith rose as one of the stars of the 2021 season. A female artist, a figurative painter, and a contemporary Surrealist memorably skewering identity and gender, Smith was both a fresh take and fit the mold for market interest. Her prices peaked in June of 2021, then seemed to follow the pattern of a consolidating market. Suddenly, this month, a buyer paid another price at the record level, raising questions about the trajectory of her market.

Smith made her auction debut in 2018 at Phillips in Hong Kong. The Studio (Memphis), 2014 sold for $11,250. It was originally purchased from the now-closed Laurel Gitlen Gallery, who presented Smith’s second New York solo show, Medusa, in 2015. The year before, it was reported that the gallery sold comparable works by Smith at NADA Miami Beach for $6,375. The Studio (Memphis) was displayed in Smith's first institutional solo exhibition at Le Consortium, Dijon, France from November 2018 to April 2019. In January 2021, the institution acquired the work for its permanent collection. 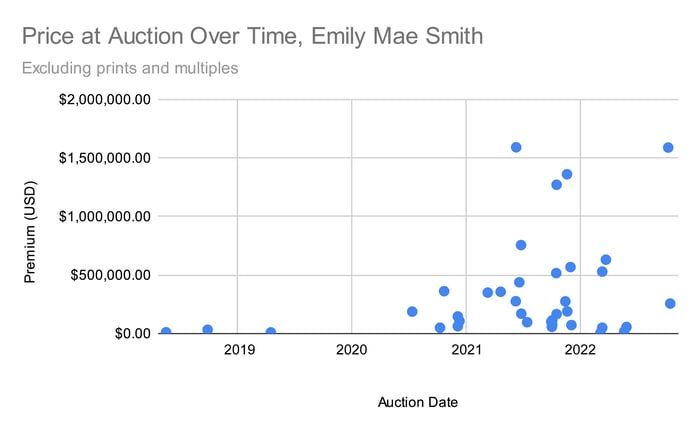 After another five-figure sale at auction in 2019, Smith’s market made significant strides. Between July 2020 and March 2021, Smith had a series of paintings sell at auction for prices firmly in the six figures. In this period, Smith was the subject of gallery shows in New York, Berlin, Tokyo, and Brussels. In February 2021, Petzel announced its joint representation of Smith in New York alongside Perrotin in Paris and Asia and Rodolphe Janssen in Brussels.

That gallery support seemed sufficient to sustain a six-figure price-point at auction. It came as a shock, then, when Broom Life, 2014 sold for an astounding $1,591,608 in June 2021. At 30 times its estimate of $51,550, the record sale made headlines. The painting, which sold in Hong Kong at Phillips (with marketing support from Poly Auction), features one of the artist’s signature anthropomorphic brooms, feminine in posture yet phallic in form.

It seems the combination motif and market likely made the sale: Smith’s top two prices at auction were achieved by broom paintings sold in Hong Kong. But the Chinese buyer of Broom Life, who also happened to own a study of the work (according to his Instagram), also seems to have been willing to pay any price. According to Nate Freeman, the buyer posted (it’s now deleted) to Instagram before the sale, “Plz don’t fight with me tmr for this EMS. We are in LOVE.” Someone did fight with him, but our Chinese buyer proved his devotion.

Chinese buyers weren’t the only ones seeking Smith’s work. In the same month, her paintings achieved strong prices in Hong Kong and New York. Both sales featured the kind of works collectors prize most, ones with her signature brooms combined with direct references to Surrealists past using clocks and mustaches. As more of her work comes to market, distinct types of imagery are separated out by price. The highest prices were initially achieved by her fully rendered broom artworks like Broom Life, as opposed to her outlined broom works such as Fool Pavilion, 2015. More recently, buyer tastes have expanded into her non-broom works. In fall of 2021, two works without brooms sold for seven-figure sums. 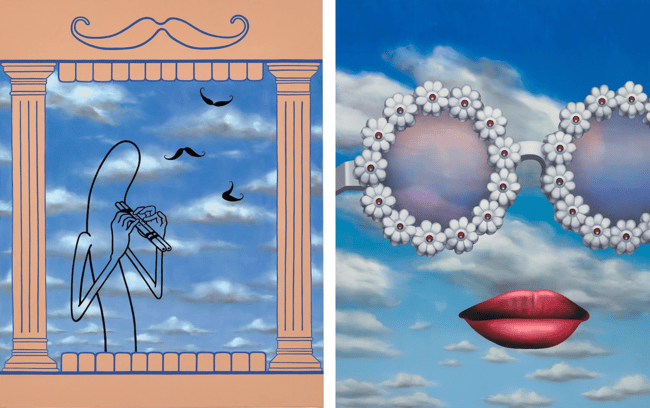 The day following Smith’s second $1.5 million plus result at auction, Petzel Gallery opened Heretic Lace, a solo presentation of Smith’s work. The Petzel show consists of eleven paintings that embody Smith’s brand of anthropomorphized objects. The canvases are selling for prices between $175,000 and $300,000. Looking toward the next few months, Smith has a major institutional show at the Pond Society in China opening in 2023. This gallery-museum combo may be key to Smith’s continuing seven-figure sweep at auction.

Jaune Quick-to-See Smith is an artist, curator, and activist from Montana’s Salish tribe. Born in...