On the Block: What to Watch the Week of May 30

This week is filled with a number of online sales. Continuing at Christie’s through Wednesday, June 8th is part one of the 20th/21st Century: Milan Online Sale. Every Italophile’s dream, the opening lot is an Arrazi work by Alighiero Boetti. This iteration from 1989 features a romantic phrase and a color palette of muted greens, oranges, and purples. It is being offered with an estimate of $32,051. A white monochromatic version of the work sold most recently in 2017 for $150,515 and before that in 2015 for $226,198. From another master of arte povera, Jannis Kounellis has an untitled work from 2002 coming onto the block with an estimate of $128,205. A very similar work with sheet metal and jute sacks last sold for $302,001, but this is not the series for which he has historically achieved his strongest prices at auction. The priciest lot in the sale is a red version of Concetto spaziale, [Attesa] by Lucio Fontana. Created in 1964, this artwork is being offered with a $854,700 estimate. A 1965 version of the work in green sold at Sotheby’s in Milan last month for $791,170 over a $435,912 estimate, perhaps informing the estimate for Christie’s upcoming lot.

Moving to France (but staying online), Sotheby’s Art Contemporain Day Auction which opens Tuesday, June 1 at 8 am EDT. Let’s take a look at the top of the price spectrum. The lot with the highest estimate in the sale is Robbie Barrat’s AI Generated Nude Portrait #7. #7 is an NFT from the pre-Beeple blowout era. It is being offered with a $429,321 estimate. A work from the series sold in March at Sotheby’s in London for $857,419, slightly below estimate. The work with the next highest estimate is a charming Keith Haring canvas from 1988. It last sold almost thirty years ago for $31,515, but this week, it comes to the block with an estimate of $279,059. Sotheby’s is also offering a table-top-scale Love sculpture by Robert Indiana. It has a $214,660 estimate. A work of a similar edition size and with similar dimensions (but inverted colors) sold for $302,400 at Christie’s just a few weeks ago, reinforcing the estimate as within range.

Rounding out our European tour, Sotheby’s Living Contemporary sale out of Cologne opens Friday, June 3 at 6 am EDT. The sale continues into the next week, during which there will also be a handful of additional online sales as well as live sales in Paris and New York. Stay tuned.

One of the most recognizable, reproduced, and parodied images of American history comes to the... 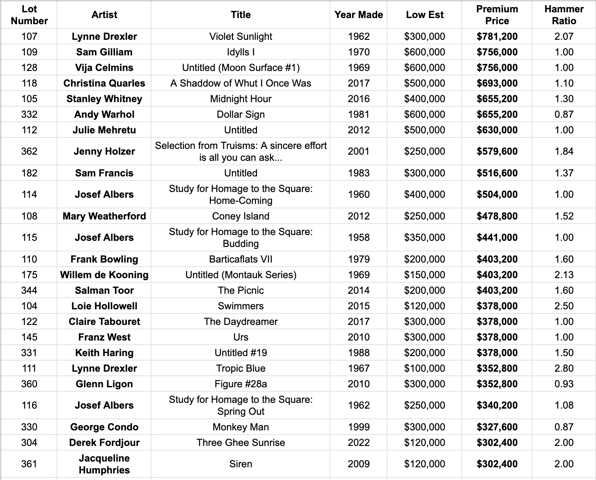