The spring sale season warms up in Hong Kong (and online)

This week the sales season ramps up with major auctions in Hong Kong as well as New York and some online sales. There is a particular emphasis on emerging talent.

Phillips Faces Places: Online Auction out of Hong Kong runs through April 27th at 6 am EDT. Lot number one is an untitled work on cardboard by Japanese artist Ayako Rokkaku. The emerging artist’s record sale took place at Phillips in Hong Kong in the fall 2021 sale season. The untitled painting sold for $811,236 over a $256,764 estimate. After a slew of successful sales in Hong Kong, Seoul, and Tokyo, Rokkaku’s work will come up on the block at Phillips in London later in the week. This will be her debut lot outside of Asia. A 2020 painting by Mayuka Yamamoto, a fellow Japanese artist with global momentum, is being offered with a $51,300 estimate. A significantly smaller 2020 painting with comparable subject matter sold in Hong Kong last fall for $100,593, fifteen times its estimate.

Moving from the ultra-emerging to the merely emerging, Phillips is offering a 2013 work on paper by breakout artist Roby Dwi Antono; it has a $10,300 estimate. The first comparable early 2010s graphite work by Antono to come to auction sold just last week at Christie’s for $22,487, seventeen times the low estimate. Phillips is also offering a 2019 print of Susumu Kamijo’s signature poodles at a $2,550 estimate. A work from the edition sold last week for $11,340 over a $2,500 estimate in Phillips Editions & Works on Paper sale.

In Sotheby’s Contemporary Curated sale, for which bidding closes on Thursday, April 28th, the opening lot is by up-and-comer Cristina BanBan. BanBan is jointly represented by Perrotin and Skarsdedt. She is a current collector favorite. BanBan’s 2017 painting has a $15,630 estimate. With just a handful of auction results, BanBan’s record price was achieved last month when a 2019 painting sold for $185,039 over a $20,026 estimate. This sale will also be the auction debut for a less well-known name, Indonesian artist Fika Leon. A 2019 painting is being offered with a $3,907 estimate.

Phillips New Now London Auction will also take place Thursday, April 28th at 10 am EDT. The sale’s title emphasizes the new so a number of artists will see their debut lots. A 2020 painting by Georgia Dymock is being offered with a $13,068 estimate. Her solo exhibition at JD Malat Gallery just came to a close. She will receive her MFA in Painting from the Slade School of Fine Art in 2023. Robel Temesgen, who is also still currently enrolled in a graduate program, will also see his debut lot at auction. The lot consists of a ceramic artwork paired with a work on paper. It has a $3,920 estimate. Monica Kim Garza’s debut lot, a 2017 painting, is being offered with a $5,227 estimate. She is represented by V1 Gallery in Denmark and recently had a show at the Hole, NYC. Brian Lotti’s debut lot, a 2020 painting, is being offered with a $9,147 estimate. Lotti is a professional skateboarder as well as a painter and film director, a man of many talents.

Artists usually come onto the auction market tentatively with a work or two testing the waters. Not Jordy Kerwick. He will see his ninth artwork at auction since the start of 2022. The work on paper–an untitled depiction of a tiger from 2021–has a $7,841 estimate. A comparable 2020 work on paper sold last month for $15,120, doubling its estimate. A 2018 portrait by Oluwole Omofemi is being offered with an estimate of $19,601. Omofemi achieved a record result in March when his 2020 painting sold for $189,000, almost nineteen times its estimate. As a result, his prices at auction on average have increased. One of the most expensive lots in the sale is a 2020 mixed-media work by Rafa Macarrón. With a $130,676 estimate, it could be one of Macarrón’s highest results yet. Last fall, a 2019 diptych by Macarrón sold for $551,641 over a $64,241 estimate. 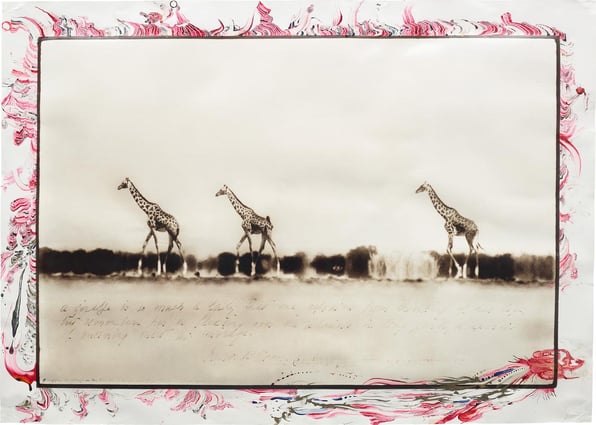 What Happened in … Hong Kong